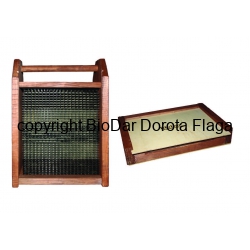 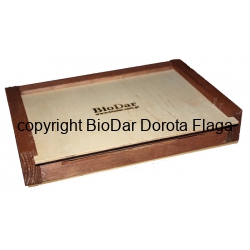 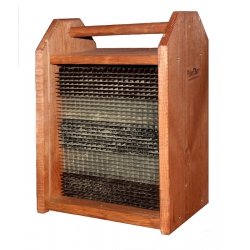 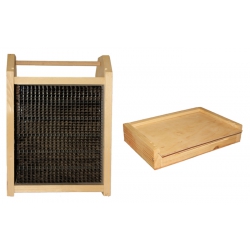 The set includes detailed instructions for using the BioDar set.

The number of nests is adapted to the needs of 700 bees in a season abundant in food. Such a set can be used for many years, and following the instructions for proper keeping osmia breeding allows you to increase your own mason bee population quickly.
The set is enough for half a hectare of apple and pear orchard. Check what amount of cocoons are recommended for 1 ha of other crops: (click here)

The set should be placed at any height, preferably not less than 1m from the ground, in a place providing protection against rain and wind, and the nesting box with trays must not be exposed to direct sunlight (high temperature during hot days may cause deformation of nesting trays and narrowing the nest channels)!

Useful links:
- recommended amounts of bees depending on the type of crop: http://www.biodar.com.pl/EN/oferta_murarka_ogrodowa.php?page=murarka_ilosci

The sphere of cultural heritage includes products decorated in a way characteristic for different cultural groups. The high quality of our products is appreciated by very demanding customers. Their valuable remarks make the farm's offer constantly replenished and the products are perfected.
BIODAR System